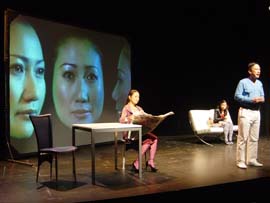 There's something funny in the water and your body (or bits of it) may be up for sale! Set in a sinister alternate future Singapore, The Ultimate Comodity, is a play by Daniel Jernigan and based on a dystopic short story by Singapore author, Gopal Barathaman. The work uses vision and sensor fusion technology to combine live theatre and augmented reality into a new kind of narrative. 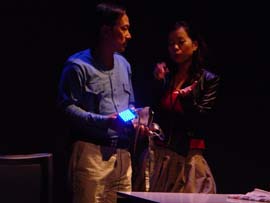 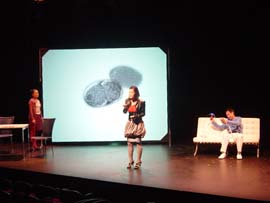 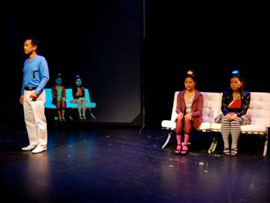 This work uses a hybrid tracking approach – position tracking an active marker while at the same time tracking the orientation of the observer with the use of inertial sensors.

The active marker is made up of an single color light-emitting diode (LED) mounted on the actor’s head-mount. Each actor wear a different color pad, allowing the system to distinguish each independently. The system detects three LED pads, using high-end Dragonfly cameras as vision tracking devices. An inertial sensor with 6DOF is attached to the head mount to capture orientation and rotation actors heads. 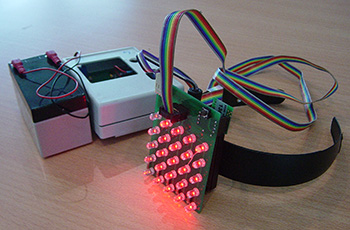 The project employed ther use of real-time 3D rendering and animation of 3D virtual heads using lip-synch for the speech of the characters. The “cloned” or “confused” identities among the characters in the play is implemented by “replacing” the head of one actor with another’s. Realistic 3D head models are rendered in real time onto the actors on the screen. The positioning of the model depends on the tracked location of the LEDs.

Pre-recorded voice tracks were then embedded in the live video stream (synchronized with the script and action) and a lip-sync technique was used to animate the 3D head’s lip movement. Each model was constructed with a sequence of “visemes” that are interpolated (morphed) to synchronise with the voice track. This makes the model “talk” in real time and in sync with the other actors on stage.